I present a vintage web site, full of information about Star drums?

Here’s my personal ‘love story’ behind it:
Back in the early 1970’s – exactly in August 1974 – I bought my first serious drum kit: A brand new
Royal Star kit at a music store here in Northern Germany (I still can recall that moment like it was
yesterday). I played it for approximately ten years, and I was happy with it: It was perfectly suitable
for the time in my first school band, lateron for gigging at weddings, dances etc., etc.. Still later,
in the 80’s, I stopped playing drums due to starting a business career.
While growing older, building up a family and after the birth of my son, I thought I’d NEVER touch
these drums again … So I sold the complete kit. What a huge mistake! As a child grows up, I should
have considered, that there will be a time again, when I would have time again, huh … ?!
So, after a 17 years stop, I started playing drums again, first with a cheap set. But the desire, to own
my first Royal Star drum kit again, became bigger and bigger … 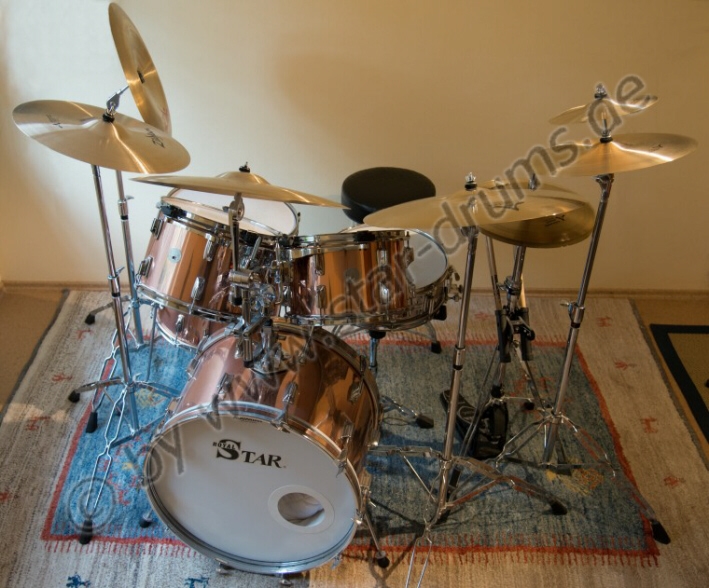 Long story short, I was able to find out
where the drummer lived, to whom I
once had sold this kit. He still owned it
and told me, that he had been 100 %
satisfied with it, always. But I started
to hassle him to resell it back to me.
Finally it lasted one year talking to him,
forcing him gently …
Now it’s mine again!

Since then, I’ve bought a second
Royal Star drum kit with exactly
the same configuration, so that I
don’t need to dismount my beloved
rehearsal kit at home any time
we’re gigging.